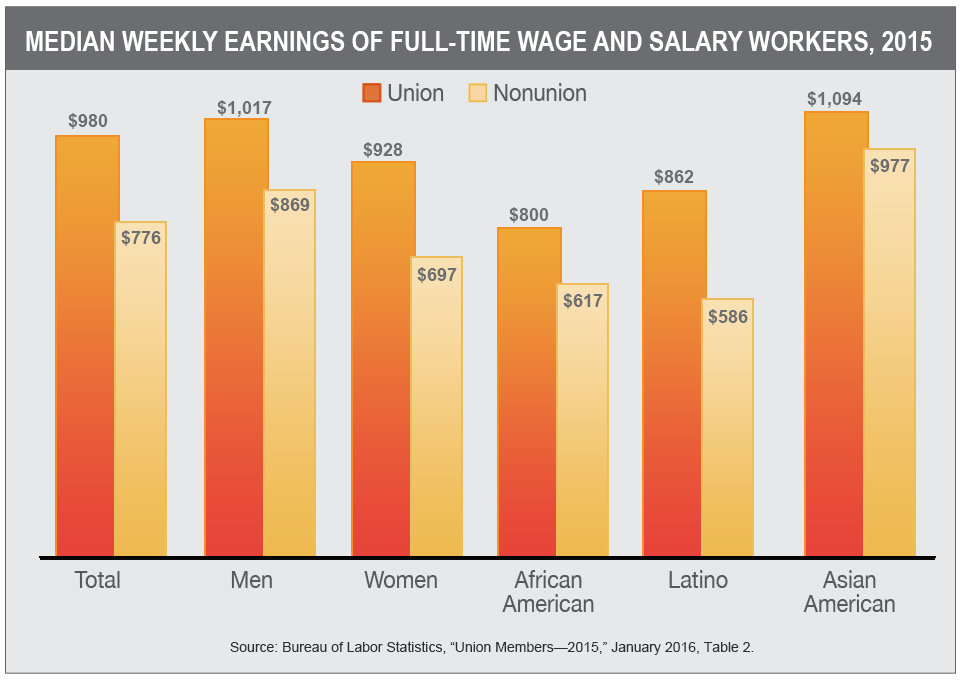 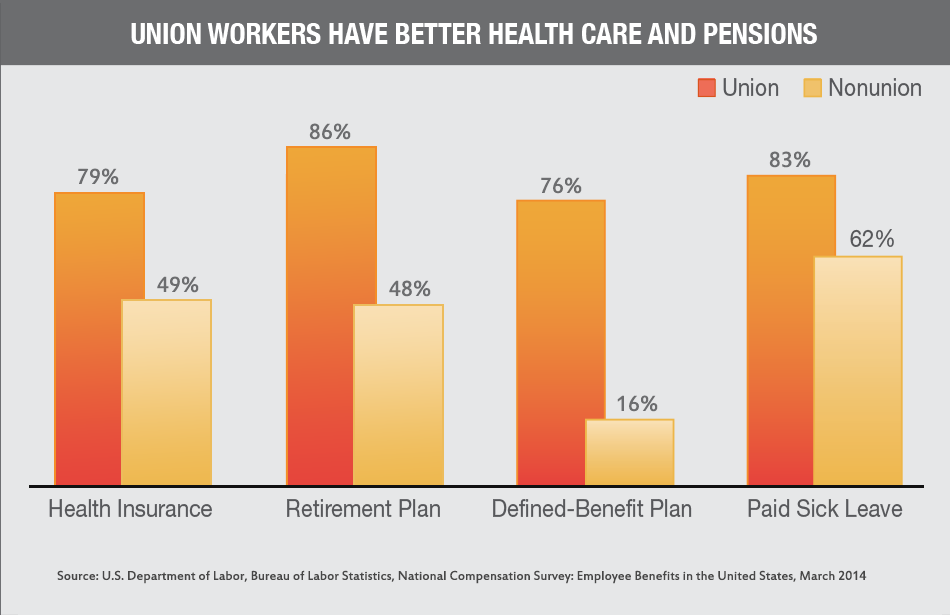 In states that have laws restricting workers' rights to form strong unions, the average pay for all workers is lower. So-called right to work for less laws that limit workers' rights to collectively bargain contracts (including wages and benefits) are a bad deal for all workers. In 2010, average pay in so-called right to work states was 14 percent lower than in states where workers have the freedom to form strong unions. 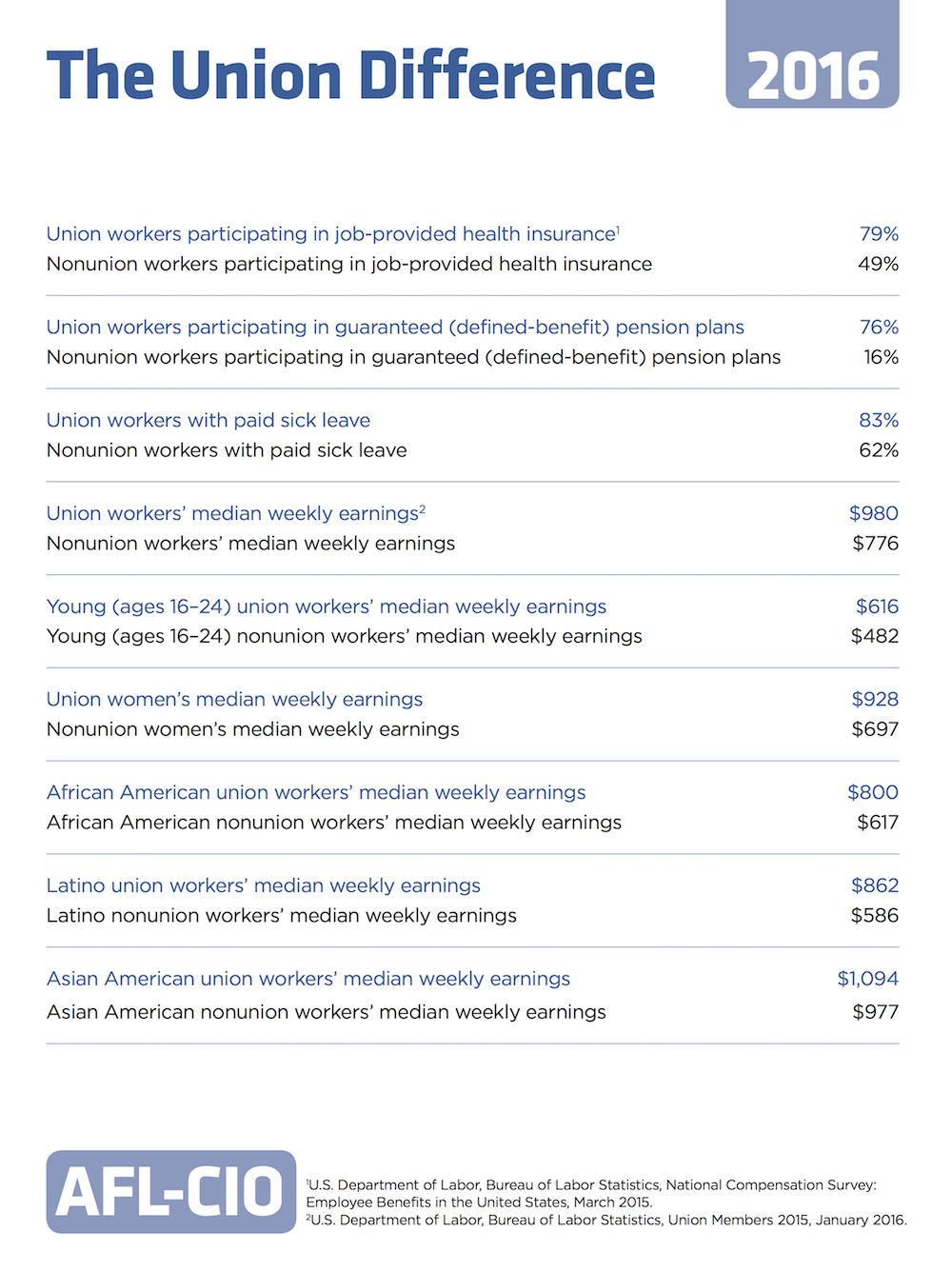 When you and your co-workers decide you want to organize your union at work, labor law protects your right to do so, and your employer is not allowed to do the following 35 things:

1. Attend any union meeting, park across the street from the hall or engage in any undercover activity which would indicate that the employees are being kept under surveillance to determine who is and who is not participating in the union  program.
2. Tell employees that the company will fire or punish them if they engage in union activity
3. Lay off, discharge, discipline any employee for union activity.
4. Grant employees wage increases, special concessions or benefits in order to keep the union out.
5. Bar employee-union representatives from soliciting employees’ memberships on or off the company property during non-waking hours.
6. Ask employees about union matters, meetings, etc. (Some employees may, of their own accord, walk up and tell of such matters. It is not an unfair labor practice to listen, but to ask questions to obtain additional information is illegal).
7. Ask employees what they think about the union or a union representative once the employee refuses to discuss it.
8. Ask employees how they intend to vote.
9. Threaten employees with reprisal for participating in union activities. For example, threaten to close the business, curtail operations or reduce employees’ benefits.
10. Promise benefits to employees if they reject the union.
11. Give financial support or other assistance to a union.
12. Announce that the company will not deal with the union.
13. Threaten to close, in fact close, or move plant in order to avoid dealing with a union.
14. Ask employees whether or not they belong to a union, or have signed up for union representation.
15. Ask an employee, during the hiring interview, about his affiliation with a union or how he feels about unions.
16. Make anti-union statements or act in a way that might show preference for a non-union man.
17. Make distinctions between union and non-union employees when signing overtime work or desirable work.
18. Purposely team up non-union men and keep them apart from those supporting the union.
19. Transfer workers on the basis of union affiliations or activities.
20. Choose employees to be laid off in order to weaken the union’s strength or discourage membership in the union.
21. Discriminate against union people when disciplining employees.
22. By nature of work assignments, create conditions intended to get rid of an employee because of his union activity.
23. Fail to grant a scheduled benefit or wage increase because of union activity.
24. Deviate from company policy for the purpose of getting rid of a union supporter.
25. Take action that adversely affects an employee’s job or pay rate because of union activity.
26. Threaten workers or coerce them in an attempt to influence their vote.
27. Threaten a union member through a third party.
28. Promise employees a reward or future benefit if they decide “no union”.
29. Tell employees overtime work (and premium pay) will be discontinued if the plant is unionized.
30. Say unionization will force the company to lay off employees.
31. Say unionization will do away with vacations or other benefits and privileges presently in effect.
32. Promise employees promotions, raises or other benefits if they get out of the union or refrain from joining the union.
33. Start a petition or circular against the union or encourage or take part in its circulation if started by employees.
34. Urge employees to try to induce others to oppose the union or keep out of it.
35. Visit the homes of employees to urge them to reject the union. - See more at: http://insulatorslocal12.org/organize#sthash.tvoL1Uhb.dpuf

If you are interested in organizing your workplace please fill out the form below: