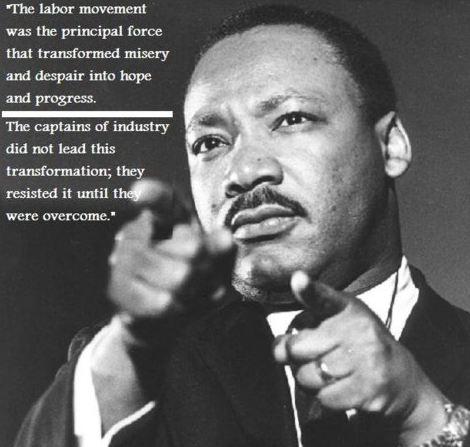 Posted:
Monday, January 17, 2022
Monday, January 17, 2022 we celebrate the federal holiday honoring Reverend Dr. Martin Luther King Jr. Dr. King was a civil rights activist who spoke out against racial inequality in our nation and led peaceful protests which defined the civil rights movement of the 1960’s. What many might not know is that Dr. King was also a staunch supporter of labor unions. He understood that true equality for all citizens could only be achieved through economic equality, which was, and always has been, at the center of the union labor movement.
Dr. King delivered his now famous “I Have a Dream” speech at the March on Washington for Jobs and Freedom during the summer of 1963, which led to the passing of the Civil Rights Act of 1964. This act specifically prohibits discrimination of individuals based on race, color, religion, sex, national origin, and later sexual orientation and gender identity, moving citizens in the direction of economic equality. On April 3, 1968, the very night before he was assassinated, Dr. King rallied in Memphis, Tennessee in support of the striking sanitation workers. Clearly, Dr. King believed the key to economic equality, and thereby racial equality, lay within the power of union organizations.
Now, more than sixty years later, it is evident how labor unions enforce equality in the workplace. Not only do union workers earn higher wages than non-union workers, but the wage disparity among women and minority groups is negligible compared to non-union workers. Labor unions help ensure all workers have the same economic opportunities. In addition to benefiting unionized employees, the contract victories won by the labor movement have raised the standard of living for most non-unionized workers as well. Labor unions set the bar for working conditions, and it pushes non-union organizations to try and keep up. Dr. King saw the power of unions as a means to advocate for the racial equality he so fervently fought for. If the power of the union is weakened, if unions cease to exist, economic equality and therefore social equality, would cease to exist as well. On this MLK Day, we ask our membership to reflect on the many contributions that Dr. King made to the labor movement and our continued involvement as union members in bringing equality to the workplace.
Found in:
Presidents Message